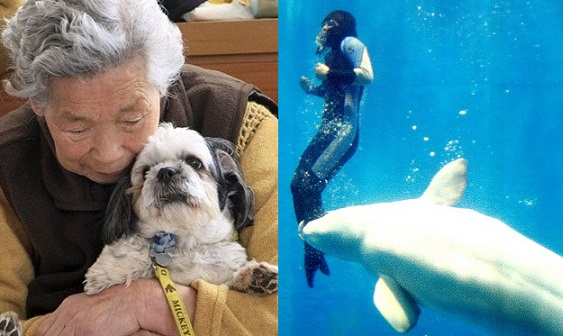 In this Wednesday, March 23, 2011 photo, Tami Akanuma, 83, holds her Shih-tzu dog “Babu” at an evacuation center in Miyako, northern Japan. When a massive earthquake struck on March 11, 2011, Akanuma was with her dog at home located 200 meters (about 219 yards) away from a coast. Soon after the lights went out, the dog started running around furiously. Then she prepared to walk her dog, even though it’s a bit early from their regular dog-walking hours. During her preparation, tsunami alert was issued and she opened the door of her house for evacuation, and the dog dashed out toward a hill, which was different walkway from regular course. According to Akanuma, when she became sluggish, the dog looked back on her and seemed it urged her to walk, and once she caught up with her dog, it stroke out again. And finally Akanuma could arrive at a shelter about 1 kilometer (0.62 mile) away from her home, just before the tsunami engulfed the walkway they took. Babu was usually unwilling to take a walk, so Akanuma believes that the dog might have predicted the tsunami. Babu celebrated her 12th birthday on March 23. (AP Photo/Yomiuri Shimbun, Tetsuya Kikumasa) JAPAN OUT, MANDATORY CREDIT