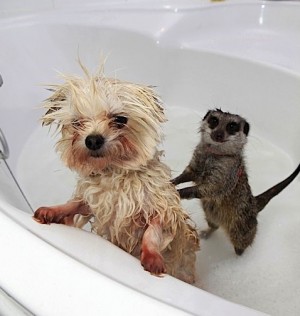 Dog Poppy and meerkat Timon in the bath at their home on July 14, 2011 in Dronfield, England.

This meerkat and dog have been inseparable ever since four-year-old Timon was sent packing by his meerkat mob. The friendly animal found comfort in the arms of owner John Bentís dog, Poppy, and the unlikely pair have formed a mob of their own – which includes John, his wife, Sally, and their two children. ìYou wouldnít expect a meerkat to be friends with a dog,î explained hospice service manager Sally. ìThey tend to stick very much to their own kind.î The couple, from Dronfield in Derbyshire, has a collection of exotic critters, which started with a pair of skunks three years ago. Since then their menagerie has grown to include meerkats, raccoons, coatis and kinkajous.However, it is the relationship between six-year-old Chihuahua-Maltese Terrier cross Poppy and Timon, which is most surprising. The are inseparable,î said John, who owns a surface coating company. ìTimon came into the house and instantly struck up a relationship with Poppy, who is just about as small a dog as you can get. ìNow they do everything together. They go for walks together and play together until they fall asleep on the sofa together.